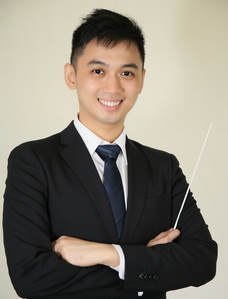 Benjamin Yeo (b.1985) is a Singaporean composer-conductor who is internationally notable for his original wind band works. Being very active in the local band scene, he has guest-performed for many tertiary/professional groups on the trumpet and E-flat horn, as well as guest-conducted various ensembles in Singapore. His experience in band directing has enabled him to work with students across a wide spectrum of educational institutions from primary to tertiary levels. As a conductor, he has learnt under the mentorship of prominent professors in the field such as Dr. Mallory Thompson, Dr. Steven Davis and Dr. Shawn Vondran from the USA.

Benjamin started writing and arranging music for wind bands and ensembles at the age of fifteen before learning under the tutelage of his principal teacher, Dr. Kelly Tang and seminars under Dr. Zechariah Goh. His works have since been performed in both local and overseas festivals/concerts, and have also been featured on both national and international platforms such as the locally held Singapore Youth Festival Arts Presentation for Brass/Concert Bands and the prestigious Midwest Clinic, an annual International Band and Orchestra Conference held in Chicago, Illinois. He has also been invited to serve as an adjudicator for events such as the Junior Band Festival in Singapore, the All Chinese Wind Band Competition in Taiwan and The Sichuan Wind Orchestra Competition in China. Benjamin is very active as a guest clinician and conductor with invitations locally and overseas.

Most of his music has been published by C. L. Barnhouse Company and Carl Fischer Music, who are well-known and long-lasting American publishers of band music in the world, as well as Beriato Music (Belgium) and Tierolff Muziekcentrale (The Netherlands), both reputable publishing houses in Europe. A number of his works have also been ranked the Top 100 of over 800 titles in the American Band College/Band World Magazine/Western International Band Clinic Literature Lists and has been recorded by renowned ensembles like the Washington Winds in the USA, the Royal Netherlands Army Band ‘Johan Willem Friso’, Rundfunk Blasorchester Leipzig, Royal Band of the Belgian Guides and The Royal Band of the Belgian Air Force in Europe. Most recently, his "Winds of Niagara" won the Dallas Wind Symphony Fanfare Competition and was premiered in March 2017 at the Morton H. Meyerson Symphony Center by the Dallas Winds.

As an active and well sought-after published composer, Benjamin writes largely commissioned works and is a member of the Composers and Authors Society of Singapore (COMPASS)
中文简介：